Everyone/PG 13
Overcooked! is a co-op cooking game developed by Ghost Town Games and published by Team 17. The game released August 2, 2016, and is available on PlayStation 4, Nintendo Switch, Xbox One, and Microsoft Windows (Steam).

Overcooked is a chaotic couch co-op cooking game for one to four players. Working as a team, you and your fellow chefs must prepare, cook and serve up a variety of tasty orders before the paying customers storm out in a huff. 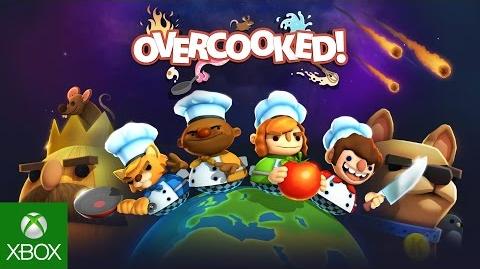 Overcooked Launch Trailer
Add a photo to this gallery

Retrieved from "https://overcooked.fandom.com/wiki/Overcooked!?oldid=1159"
Community content is available under CC-BY-SA unless otherwise noted.